Skip to content
In three weeks, I will be leaving for a trip to tour Scandinavian countries, the Baltic Sea, and Russia.  Friends often wondered why I choose these less common destinations. My answer is simple, “because I have never been there”.  For a photography enthusiast like me, all places have unique aspects of their own and I will always find them interesting.
I’ve traveled intensively in my 30s, but they are all business trips and the digital camera was not readily available as it is now. I wish I have kept a journal but I did not. Though I have experienced a great deal while I was rolling my suitcase from one country to the other, my fading memory does not allow me to recite a lot of details.  But I always remember my embarrassing moments and the moment that my emotion has taken place.
One time I had to take a train from London to Manchester to visit a customer. There were barely any people on the platform.  An old lady (that’s me now) came to me and looked at me sympathetically, “Are you lost?” she said. “No. I am going to Manchester to see a company.”  She then asked me, “how old are you?”  “29”, I said. She thought I looked awfully young and could not be in business. She insisted that I was lost and she needed to call the police. I could not convince her that I was completely OK and I saw her walking toward an officer. Gladly the train arrived at that time and I hopped on the train….
Off the train, I still had to take a cab to the company address. I finally made it and had a great first meeting with this company in Manchester  The owner was happy and he offered to take me back to the train station. I was of course thrilled. I started to dream about a good size order and I walked really fast towards his car. The right side of the door was open and I threw myself down from the seat. I heard an ouch and was immediately brought back to reality. I jumped out. OMG. I have forgotten I was in England, the driver is on the right side, and I actually sat on his lap!
In Oct 2007, my friend Maria and I went to Hong Kong on business at the same time, but we did not know till we ran into each other in the hotel lobby.  We were both thrilled and we decided to go to Guilin, Guangxi province for a weekend adventure.  I was not prepared and only had the company’s camera that I took product images with me.  Maria just bought a digital point-and-shoot camera, good enough, we thought.

Early in the morning, I stepped out of the hotel for a walk along the river.  I was surprised (actually I should not, knowing how diligent Chinese are) to see many people have already filled up the sidewalk and doing their Tai-Chi exercise. I was used to Hong Kong’s busy and crowded streets where people walk shoulder to shoulder, but I did not expect it was also so crowded here.  I could barely walk through the crowd.  Not all easy, but I finally found a slot where I could look at the river and enjoy the remaining morning sun. Immediately when I looked down the river, I was drawn to this fisherman.
I watched him cast his fishing net again and again, but I have not seen any single finish trapped in the net, no sign at all. Instead of using his oar, he used the long pole to steer the raft to free his hands from the fish net. I looked at his bamboo raft, there were two small jars of fishing baits, one rectangular container appeared to be used as a fishing basket, and on the other end, something looks like a pouch but it is flat, maybe it is just a fishing tally. Sun was scorching hot and the humidity seemed high. I bet he was steaming hot. I could find neither a water bottle nor a lunchbox.
He worked so hard and so persistently, but he just did not engage any connection with the fishes. I found my feet glued to the ground for a good hour, but I did not see any fish. I left. I could not observe the scene any longer. This low-resolution image has always been in my mind and it still grabs my heart in retrospect. As weak as a bamboo raft and his simple fishing gears, the image transmits endurance, power, and perseverance. 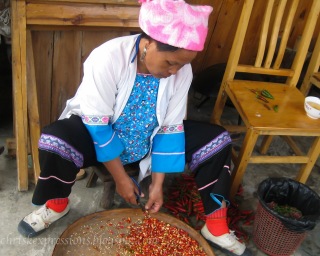 This minority woman used a pair of scissors to slice red pepper, the small and super spicy red pepper, piece by piece. We walked by her and went to a restaurant for lunch. Then, we hired a guide to take us up to the top of the rice terrace to enjoy the stunning view. By the time when we came back here, it was at least three hours later. She sat exactly where she was, still had the pair of scissors in her hand cutting red peppers and she did not even lift her head when we passed through the second time.  More sliced red peppers were in her rattan shifter. Nothing else was changed. Colorful as it seemed to be as shown in her outfit, I can imagine how boring and tough her life is. 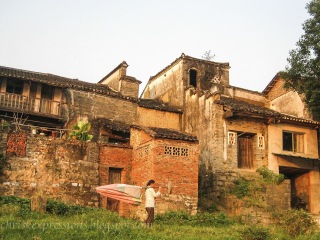 I like the texture of these brick houses. I believe that they had their glory days when they were brand new. Had a strong desire to go in and check them out, but of course, I was not daring enough to knock on the door. I looked at the picture over and over and wondered what is the living condition inside.
This woman walked into the scene so fast that I could not respond quick enough to focus on her instead. Her sudden presence had just added one more hard-working soul to this giant community, China. 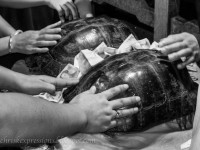 The tourists were gathered inside the cave and invested their hope in these turtles which were claimed as thousand years old. The magic power will be transferred into your body if you put your hands on the turtles. Good fortune and luck will follow when you gamble your dollars ???
NOTE: While I am traveling in August, I hope to keep up with my regular blog posting. But I also expect that my postings may not be as regular as on Wednesdays and Fridays. It depends on the availability of WI-FI and our travel schedule. But I am excited that I will be able to photograph something different in foreign countries for a change.

One thought on “A Traveler’s Journal”