Skip to content
Friday should be the beginning of an easy and relaxing day. I intend not to approach serious subject, but we are under attack by squirrels and I have to vent it out.  I know this may upset some people who love squirrels, just you know that squirrel is still the winner up to this point.
When my kids were small and we lived in California, they liked squirrels and so did I.  They came crawling around and they left.  Here in Oregon, we are surrounded by nature and we literally live in the small forest. Our house is surrounded by pine, fir and cedar trees. The walking paths in the yard are often covered with needles and pine cones and acorns. Such environment invites squirrels. They are regular visitors. Early on when I heard neighbors complaining about squirrels, I still had my doubt. Now I am in it and I begin to understand why.
It must begin when we started to put out bird feeders. I understand that bird seeds are temptation for squirrels, but they are ‘bird’ seeds, not ‘squirrel’ seeds, in theory, squirrels should stick with their own food, which is the nuts from pine cones. Chinese call squirrels 松鼠, that means ‘pine rats’, there is reason behind that.
A squirrel chewed and tore the tough netting of our brand new expensive patio chairs when it could not reach a bird feeder, that was my first shocking experience with squirrel. Originally we thought it is Ok for them to also enjoy some bird seeds, but we had discovered an immediate problem because they would completely take over the feeder, consume all seeds before they let go. Otherwise, they dump all the seeds from the feeder on the ground so that they can wolf all down quickly. Sometimes they literally kicked the feeder off the hanger and let the whole feeder drop on the ground. Seeds gone, feeders gone, but squirrels are still around. 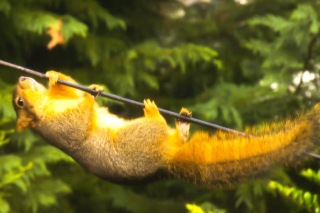 We decided sometime that we should feed them. If they are fed, they won’t bother bird’s food. But they eat the corns we set up for them, and they come after bird’s seeds anyway. Taking a friend’s advice, I spiced the seeds with Cayenne pepper. They are not used to Si-Chien spicy flavor, so they quit coming to the feeder.  But they did not just leave the birds alone, they pulled the feeder out of the tree limb and leaves the seeds all over the grass. If I cannot get it, you bet no chance either.
Give up? Not yet. We invested more to get Squirrel-free feeders and the fortified feeders do say No to squirrels.  We enjoyed a period of zero squirrels on feeders. We saw them working hard on pine cones.  We liked what we saw. This is the way suppose to be. Unfortunately, we did not have a peace treaty with them, and suddenly they launched guerrilla wars against us this spring when all flowers were smiling at the sun.
If you have been following my blog, you know they ate my favorite ‘Amethyst in Snow’ and Tulips. They devoured all the tulips my daughter gave to me and they were munching down my favorite flower, right in front of me, more than once and posed victoriously.  In addition, they pulled coconut fillers from my flower boxes!  It was spring time, coconut fabric may provide their new babies good shelter, so I put out a large pile of coconut fabric which has been torn loose and easier to grab. But squirrels were aiming at my new coconut fillers and they appeared, intentionally, to pull the ones that I could see through the windows. They had no fear to be caught red-handed. I have to conclude that they know what they are doing. They purposely stole my stuff while I was watching it, these daring bandits.
Something has to be done, I raised the crisis to my husband. Steve loves to create small devices and he took a whole weekend to make a Squirrel Launcher. We want to scare squirrels but we don’t want to hurt them. We put bird seeds inside a deep planter which was tied to thick rubber bands, when squirrels come for the seeds, the weight will trigger the launcher and bounce squirrels to the tree limbs behind us, as simple as that. Squirrels would have a fun trampoline ride and we have fun watching the show.  We even videoed the launch, but my husband deleted it accidentally

when trying to trim the clips down. Squirrel Launcher gave squirrels free fun rides and they kept coming back!

Launcher failed. I sprayed them with high pressure water when they were pulling coconut fabric from my flower boxes and that only stopped them temporarily. They are aggressive, persistent and smart creatures.
Just this last weekend, when my husband was resting on his lounge chair on our deck.  A few pieces of acorns landed on his chair. They were coming down from a 50 feet oak above us, some already cracked open and some not. Steve looked up and saw a squirrel. He thought the smart guy was pushing down some acorns to enjoy later. More acorns came down, quite a few. So I gathered them and put them on our patio table for the squirrel. But IT has not come back since last Saturday.  We have to make the conclusion that squirrel was launching its bullets on my husband. Apparently, they did not enjoy the Launcher.
Squirrel war is not over and I don’t think it will be over anytime soon. Before an ultimate solution (not sure if there will be one) is in place, I have to let go my steam and find something way to cool myself down.  It will go up to 90+ degree again today, and I refuse to be stirred up by squirrels. I picked up the tiny acorns (penny size) and my camera. I used a 36mm extension tube and F2.8 shallow depth of field. The acorns are placed on the glass tabletop. Sunset light has created a soft shadow and glass, ripples. I thought about Iceland for some reason, and I am cooling down….

I have a beautiful yellow rose bush growing in the garden. It has thick and extremely spiky thorns, but produces fragrant and gorgeous flowers. I pulled apart the pedals after the flowers dried out and used them as potpourris. The natural light scent is very pleasant and soothing while I tried to calm myself down from my squirrel rage.

NOTE: I will  be traveling in August, I hope to keep up with my regular blog posting. But I also expect that my postings may not be as regular as on Wednesdays and Fridays. It depends on the availability of WI-FI and our travel schedule. But I am excited that I will be able to photograph something different in foreign countries for change.

2 thoughts on “Battle with squirrels – for laughter only”