August 2, 2013August 23, 2017
Earlier this spring, I attended a photography shooting event at UH’mazing Race which is sponsored by PCL (Partnership in Community Living) and Home Depot. It was a much low-key Amazing Race than what you saw on TV, but it is quite impressive considering it is just a local event.
I took lots of pictures and have been looking at them repeatedly and still found them interesting, so I decided to share.The event demonstrates a true American adventurous, free-spirited and creative spirit.  No fear, no hesitation, go for it. The contestants are serious about what they do, and as far as I can tell, they also get lots of fun out of it. The team effort they displayed is simply outstanding. I admire these cultural traits and I believe that have made this country prosperous and distinctive in many aspects.
Creative & Detailed: The contestants come dressed as a team.  Either they are Flamingo dancers, Judo black belts, airline pilots or athletes, they did fairly good job to design their costumes and put together creatively.  The dancers look very eye-catching, but all they do is to place a few colorful polyester net on top of their jeans, tassels on hem and matching shoe laces. One wears flower on right side and the other left. Bold appearance with fine mind.

The ‘goggles’ worn by the pilot couple are just neoprene eye mask with holes cut out. Simple but looking realistic. 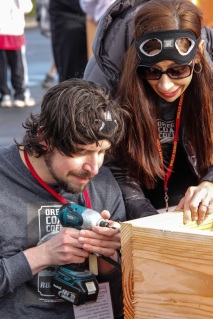 Men and women are equally competent performing: Both men and women use drills and equally capable to be precise and technical to make wood boxes. I don’t use a drill, I use hand screw driver because I cannot control the vibration of the electric drill and instead of doing it faster and better, I would screw it up and make it worse.  But in this society, women do not show any sign of being weaker, they are participating almost everything men can get their hands on.

Any cost just for fun: Would you let someone spray colored water straight into your mouth and make a mess out of you? I won’t. She was all furnished with water-proof goggle and jumpsuit. Her partner handled the water gun well, but they laughed so bad that the spray was moving from one spot to the other. They had so much fun and so did I.

When there is a goal, there is no fear: She was standing at the start line for at least 15-20 minutes. She was afraid and debating hard if she should do it. I hoped she would give up because I was really worried for her studying her facial expression. My heart was frozen when she launched her first step, very very slowly, the second slowly and the third. She halted a few times. I could sense her struggles, but she kept moving forward. And, about half hour later, she burst into smiles at the finish line. 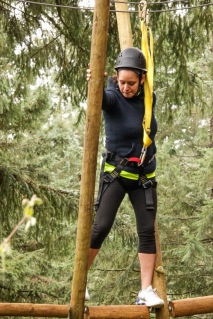 She had it in her hand, a worm. Scared at first, but she swallowed it as required by the race. I know some Africans eat worms because they are rich in protein, but here is America. Would  you eat worms for protein intake? It made me quiver just by watching that soft and slimy thing go down her throat.

Those who came to the rope lines are all younger folks. My husband suddenly decided that he liked to give it a shot. I did not believe what I heard, but I saw him approaching the start line. I could hear my heart beat… We all have a few longest hour in life and this is definitely one of them for me. To my surprise, he finished it and faster than several other young guys. 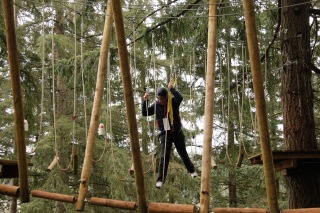 I admire American spirit. It is definitely something that I am looking up to.   If I ever get psyched up enough to make that daring move, I too will be able to demonstrate the American Spirit!