Skip to content
I was here two months ago. There were abundant water and lively vegetation along the beach. The sky had that screaming blue and white cloud had its dramatic display. The colorful water plants were tanning under the sun while crystal clear lake water was soaking our feet. The pleasing landscape has been always in my mind.  So I came back with my photography friends for a re-visit.
We parked the car in exactly the same parking lot and I walked directly towards my dream spot. There was the same widespread of the beach area, but instead of abundant water and vegetation, there was dry sand and cracked ground. Vegetation was mostly gone and the remaining looks brown and dry. No occasional yellow or red jet-skis or motor boats coming through to churn the peace and compete with the colors from water plants. I was stunned. The season has drained the livelihood of this place.
Well, photographers shoot everything and we should be able to find something to shoot even though there was really not much of everything… Is it really nothing? I saw two friends were looking at something in a small stream, a frog, they said. It is easy to hear a frog croak, but not easy to actually see it not mentioned to take a shot.  This creature reacted quickly. I love to listen to their croak on deep summer nights.  Thanks to my friend, this little guy was found clinging to the rock edge, hiding there quietly.  Its camouflage skin texture resonates with the rock so well. If not for her sharp eyes, I would not spot it myself.  With slight effort, I was able to lure this little critter away from the rock and take two shots before it sneaked out on me. I was thrilled to see a frog so close and even took a picture. If not for the dry ground, I would never have had this luck.
When there is water everywhere, there were plenty of reflection opportunities, but what now when the water was way down? Sky and Butt are still there, but there was no moving cloud and no variation of colors in layers like it used to be earlier in the summer.As an alternative, I focused more on the foreground and picked up a more condensed area for reflections. Butt turned into a secondary backdrop while the small islands and reflections take on key roles. It is interesting and inspiring to perceive the change and difference.
June trip was the first time that I got up early to capture some morning shots. Surely did not want to miss the golden moment, we got up early and had a cup of coffee to warm up. The moment when we looked out and spotted the heavy fog surrounding Odell Butt, we all dropped our coffee and ran out of the door with our camera gears. This was surely my OMG moment. I have never seen Odell Butt wrapped in such dramatic color spectrums, in layers and gold-filled.

Across the lake, these trees have been standing there year after year and season after season.  They are mostly pines and firs, about the same height and same color, as boring as it gets. Guess what I saw this time: shimmering fog is filling up the space among the layers, the gray sky, pastel orange sun rays, and lines of gray water ripples. Is this the earth that I am standing on? Yes, and on solid ground.

A fishing boat suddenly showed up on the scene. Two fishermen were ready to cast out their lines. I was so excited, but I held my breath and patiently waited for them to come closer, to be right on the spot that I wanted and they did just that. I bombarded them with my shots. I certainly thank them for their appearance.

Morning drama was over in an hour window. I was back to my reality, the water level is low and everything is dry. I have seen so much driftwood along the beach, and they are no inspiration to me anymore. But, there was no snow on Diamond Peak, no twist for a shot of Diamond Peak. It is bare, bland, and blah.  I am clumsy and I almost stumbled on this big stump while trying to cross over. The moment when I tried to stand up on my feet, I had a quick glance at the peak through the stump.  And, I jumped up and aimed from this angle. I think the stump echoes Diamond Peak and they rhyme. 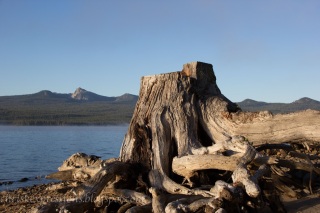 I smiled with contentment and thought it is time to head back for some breakfast. My mind was on the food, driven by the yelling from my stomach.  I just wanted some fresh granola and more coffee to celebrate my find….
A small flock of birds flew into the bushes as I was walking by. I know what they are, the ordinaries that I have seen hundred times. For now, I only want my breakfast. Suddenly I heard a chirp that I have not heard before and my curiosity arose. I spotted something yellow moving among the bushes. It moved so fast and away from me, that I only had the chance to fire four shots, and thanks to God, two of them are clear. I cannot wait to share it with you, it is a warbler.  It is not a precious endanger spice or a dramatic-looking thing like Bird in Paradise, but this is the first time when I capture a picture of a warbler. To me, it is monumental and worth a yap. 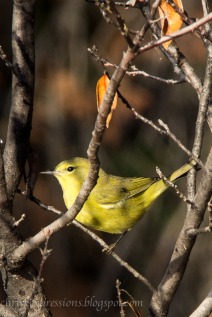 It started as an ordinary weekend. Things I expected were not there, but I discovered something else that was completely unexpected.  The fog and the frog have transformed my dismay and disappointment into a state of honey and spice.And, there was the music, the chit-chat, and laughter from my partners in crime, my precious photography friends. Together we shoot everything from the sky to rock to sand, from waterfall to wildflower to dragonfly, from the bridge to stump to nuts and bolts, whatever you can name, we can shoot.

3 thoughts on “A Foggy, Froggy weekend – lost and found”

Leave a Reply to Missy A Cancel reply