Skip to content
Helsinki 赫爾新基 was first made known to me in high school geography class. I am not sure if I ever thought about it again until I traveled there this August. The place is surely not what I originally envisioned.  I thought Helsinki is full of fishing boats but as I discovered, Norwegians are the ones who operate the major fishing industry, not Finns. Finland is famed as the Land of a Thousand Lake. It has about 5.4 million population and 590,000 of them live in Helsinki. Among the natural and wild regions, there are 200,000 plus moose and elks individually. I saw elks home in the northwest from time to time, but I have not seen a moose till it ran across the street right in front of our tour bus.
Finland was first ruled by Sweden in the 12th century and later by Russia in the 19thcentury. Helsinki was chosen to be the capital when Swedish King Gustavus Vasa wanted a capital facing the Baltic and was capable of competing with other important ports in Sweden and modern-day Tallinn, Estonia.  And, Russia wanted the capital of Finland to be close to St. Petersburg. Helsinki was built from its wild and rugged stage to this day, the capital and the most important port in Finland.Traveling in Scandinavia has educated me a great deal about the history of Nordic countries. How they were formed and reformed through the centuries of changes. Royal monarchies seem to play major roles in ruling the countries till the parliaments were formed, but their fairy tale stories continue. Finland is the only republic established in 1955 and it is the only Nordic country to join the EU and uses euro for the trade. It is more convenient to shop here since no effort is needed to identify three different Krones used in Norway, Denmark, and Sweden. We had to put money in separate envelopes and even so, we often messed up with the exchange rate and handed out the wrong money.
We did not visit other places beyond Helsinki, and right here alone, I did not see anything dramatic or distinguished from what I have seen since my trip started. My curiosity was about the influence of its earlier occupiers in the aspect of architecture (and culture) and I seemed to experience more Russian than Swedish influence here. I wish I had the chance to know more about their culture, but I could not.
The beautiful Lutheran Catholic Church was built in the 18th century. Architecture is the neoclassical style  The body of the church is primarily white with pastel teal color dome tops. The contrast is striking and yet not overwhelming. The interior decoration is elegant, exquisite, and not overly elaborate.

A typical Russian Lutheran church is like gold and this one is like jade. I have seen enough glitzy glamour along the way and towards the end of the trip, this church is like a fresh spring that delivers soothing and refreshing soul water. I so enjoyed the peace in a sacred ground without the bondage of chocking wood carvings and paintings.

It was almost the end of our trip, and the sun finally broke out of the cloud and poured it on us generously. People are sitting on church steps having their eyes closed and breathing in the warm air as I did.

Looking down from the church, there is Senator’s Square. The crowd starts from the church front all the way down to the street. I don’t know the name of the street, but I would call it the Street of Excursions. There is a long line of tour buses. It was not even a weekend day. I bet local people also swarmed out to embrace the sun. If you only get 4-5 months of decent weather, you know what sun means to them.

Mostly contemporary architecture is shown around town among a few classic buildings. I think it has something to do with the late development of Helsinki to be the capital city. Locals are complaining that their brand new opera house does not have character because it is all straight-lined and geometrically structured.

In Tooloo quarter, the Rock Church rooftop is built of a spiral formed by threads of copper wire which delivers a natural source of light for the structure. The interior is carved out of rock and the granite walls provide good echo sound that makes this an ideal concert location.

Inside the church, there is this magnificent classic pipe organ erected on rock wall. The royal blue and purple pews and their diagonal placement add a soft touch to it and make a supreme and sacred sanctuary for the believers. I would love to come to a church like this one every Sunday to worship His Majesty and adore this architectural excellence. No columns, no carvings, no ceiling paintings, I feel so free and uplifting. What a relaxing place to enjoy a concert, too! Finns claim that they have good designers and this church is soundproof.

Generally, I like contemporary styles. However, visiting old towns of the cities which preserved the unique culture of their own is still fascinating.  Classic cathedrals and castles have their extreme glamour from architecture and interior decoration point of view, but the pipe organ is my real favorite.  The craftsmanship stands its own. It is precisely designed and engineered, but not as elaborate as other decorations inside the church. I can usually do well without visiting palaces and cathedrals because the cliched and ornate decorations make them look all the same. I believe many decor pieces were mindfully designed and crafted. But without knowing the history behind it, it is just another piece of the add-on. 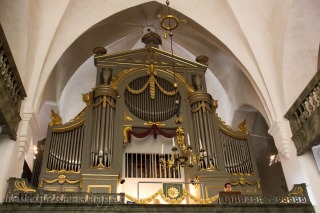 Old town Porvoo is outside of Helsinki, almost one hour away. The town is fairly small. It takes one hour to walk through the whole place. There is an old church, un-distinguished from the exterior.
The moment when I stepped into the entrance, I noticed this pipe organ and started to examine its beauty. Then I heard a singing and organ music gradually echoed and surrounded the church. I followed the singing and discovered the lady (on the lower right) playing the organ and soloing the hymns. The music came just like a breeze, a fresh breath. It is beautiful, sacred, and glorious.

Countryside Helsinki is very similar to small towns in Oregon. Lakes, rolling hills, barns, and simple farmhouses. It is the same ever-lasting natural and peaceful environment in the country that inspires me to pick up my camera and go for it tirelessly.

The picture on the right was taken in the old town and features the ordinary residential houses by the lake. The houses are not as colorful and picturesque as what we saw in Norway, but the reflection of the houses and white clouds is quite amazing.

At the mini-town square, there was the city hall and the booths with local artists’ art and craft displays. They have lots of furs, leather, and porcelain. Porcelain designs are really one of the kind and all hand-made. I certainly appreciate a place like this selling real stuff, not tons of souvenirs made in China. It reminds me of the Saturday Market in Eugene. 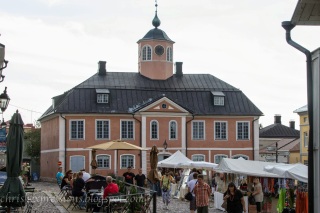 I heard Finns say Hey as hello and later I found out Hey-Hey means goodbye. Simple and practical. I like it.

Sauna is popular here, Finns have a winter sport that they are really up to it. They would steam themselves in a sauna till they sweat up and jump into a freezing cold lake to cool it off. Then, back to the heat and out for the chill. I guess they believe the extreme temperature changes in the body will strengthen the body somehow. Just like how a silversmith wrought the iron, isn’t it? For this reason, they have boats called ice-breakers (see below). This boat has built-in attachments to break the ice and open the frozen water for the ‘extreme’ swimmers…

No drama to speak of, but it resembles where I am and the extended countryside. Beauty is in nature and its subtlety.   As I close up my writing, I am still thinking of fishing….