January 29, 2014August 23, 2017
Down in bay area California to visit my siblings and run some errands.  Bright sun was shining on me the moment when I stepped out of the airport.  Instead of fog, it was sun ray, bright and cheerful. I had lived here for almost 8 years before I moved to Oregon. It is a familiar environment and all that warm and fuzzy feeling immediately came back to me. I sucked in toasty air and exhaled hoping the chill from home was being neutralized and get out of my system. I love fog, but I have had enough cold weather.

It was a nice change that I did not need a heavy jacket for a morning walk.  There were certainly more houses than trees down the streets, but backlit sunlight has cast beautiful tree shadows on rooftops. Trees are not timberline high, but they provide nice backdrops for rows of contemporary houses. Day was just about to break, these trees showcased a dramatic sky. The blue strip is the blue sky and it also resembles a coast line now I am looking at it. Nature is magical.
It has been above 65 most of the time since I got here.  Should not be a surprise, but it still was when I saw colorful pansy and poppy in full bloom. I expected to see some greens, certainly not full bloom flowers.  My urge was to take some close-up shots, but I did not bring my Macro lens, no polarizer either. Weight concerns, I often did not bring extra lens… When will I learn the lesson?

Just a few days before I left Oregon, I had a little photo tour myself shooting frosted plants. Except that most of the plants were distressed by the snow storm in December. The environment was as bare as it could be.  I was not too successful coming up something resembles what I did last year.  But I need to bring home something.  So I pick up a frosted leave and placed it on the pointed leaves of a dead tropical plant .  We tend to praise and portrait the beauty and the best, but I think reality ought to be addressed as well.

It is dead, dry and lifeless. I need to inject a bit of life to it and I thought about Orton effect. It is the Orton sandwiching technic that I used to make the image looking creaming and softer. Now desolation and bleakness are replaced with a hint of dream and a flare of art. And, The image starts to grow on me.
A yellow leaf is the first article that I had to write in a summer camp writing class back in middle school. I did not have any experience writing prior and had no clue what I can write about one yellow leaf.  We were given 45 minutes to write, but I simply could not write anything till the instructor announced, “20 minutes left”. I then jumped off and wrote three pages. In the end, I was in tears because I had mourned for the dead leaf for 20 minutes. How many silly things I have done in my life? I just began to count. 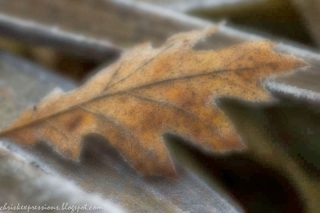 Taking enough winter images, I had intention to bring home something green, sunny or colorful.  Though there are some flowers, most of the vegetation is just gradually on its way out of winter. Evergreens are always there but they tend to be a mono green tone.

Light was beautiful. Though in multi colors, this massive grass plant has created distraction from all directions. I could not find myself a good angle of view.  So I decided to practice vertical panning and the result looked so orderly and not flexible that bored me to death.

I approached the same plant three times and took at least 50-60 shots from different angles and pan it from various orientation. I was determined to come out something. And this one finally caught my eyes. The white lines are the transformation of sunlight shooting through. All colors of the plant mingled and intertwined. I cannot paint bare-handed and my camera has given me a color paint brush to paint. Fun.

If I take this image at home in Oregon this time of the year, it won’t have the same effect, not enough colors.  But Oregon has the beauty of its own.  I could not get a decent thistle pictures for a long time and I managed to shoot this one that I like OK. I should have done some post processing to clean up the background, but I did not. I know I need to work on my DOF and focal point. While trying to get exposure right first, I often overlooked depth of field and lost track of my focal point. Practice, practice and practice.

I am ready for some warm weather.  I pray that we will be getting an early spring like we had last year.

One thought on “On the Road”