June 25, 2014August 23, 2017
My circle of friends is from a mix of different culture and region. My view for life and things in general is not All American though I have lived here for almost 30 years. Apparently this has something to do with my cultural background where my primary perception and understanding are originated and rooted. I have learned a lot about American culture since I lived here, but it is still limited in comparison with the mainstream majority. It is not me who should be here talking about American culture, but I am giving it a try based on what I know.
When my non-Oregonian friends think of Eugene, they instantly mentioned hippies. When Saturday market is addressed, tie-dye becomes the subject. When I show them 5th Street marketplace, “isn’t that where Nike originally started?” Over the years when I live here, these are the stereotype conversation that I encountered. Our European friends particularly wanted to visit Eugene Saturday Market because they want to see hippies.

I have worked with a ‘real’ hippie in an office and had business encounters with some. My hippie co-worker does not use a clock, she relies on sunrise and sunset to tell the time. She is a medicine woman herself and does not take any medicine from the counter. She carries a super long hair and dresses very plainly. No make-up, no artificial addition to her natural body. She does not drink coffee, only herbal tea and plain water. My conclusion is, they like everything natural; they are counter-cultural in regard to industrial civilization; they believe in hand-made work, organic food and down to earth outlook.

Northwest has vast green and beautiful nature where nature lovers want to be. Comparing the Saturday market between Portland and Eugene. Portland is more organized and structured. Eugene has heavy hippie influence, more organic and natural. As the population of real hippies are diminishing, the spirit of freedom and naturalism remains strong and is vividly exhibited at the market.

I would say, the lady pictured is a good example. She wears a one of the kind skirt that she may have made herself or from other hand-made source. Transportation is a bike, soul food is the guitar and violin.  Bike generates no pollution and music pleases the soul, all natural.
It must have something to do with my former career training. Whenever I am window browsing in the streets, my attention is always on apparels, colors, trends and of course something to my personal liking. I am not a frequent visitor to Saturday Market because I am not into the world of organics and local crafts. But, I am intrigued by the diversity and creativity displayed here.

Eugene Saturday market is loaded with gifted artisans and their unique handwork pieces. Every booth has a style of its own. And, almost all the vendors are dressed to fit their own theme and style that I found impressive. There is no on-going trend here, no style influence of any kind. It’s all own creation and own style. If I want to give is a name, I call it Unique styles.

The man with a hat with western flare, but then instead of a cowboy bandana, the red scarf almost looks more like the one used by boy scouts…

This little girl’s mother is selling kids clothes and she is the onsite model.  She is a classic cutie, I could not help but follow her with my camera. Except that the market is full of merchandise and the background is quite cluttered. I replaced the background with a painted texture so that her outfit will pop better. Maybe you can, I cannot tell exactly what style is this without talking to the creator herself. 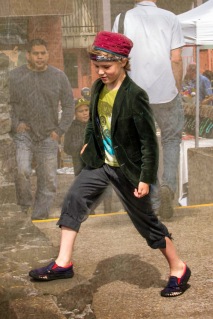 This boy caught my eyes the moment when he showed up. It seems to me that his parents have a booth in the market and he was just there wandering around. I took great interest in his outfit and followed him wherever he went. Finally I got this shot that I like, but the background is just a small circus.
I tried to remove the background, but it is a bit work that I would rather not to spend too much time on it. Photoshop 2014 has a new feature to pick out the main subject instantly, but it is not so easy if the subject is bombarded with multitude in the background. So I lightened the background with a texture. At least you can see him
better. I tried to analyze his outlet one by one from head to toe, but I cannot. I really don’t have enough western cultural background to solve the puzzle.  I think it is more an eastern European style, but I cannot be sure.

Then, here came a small crew of Ukrainian teenagers who were distributing post cards for their upcoming concert. Their bright and colorful traditional costume has certainly drawn everyone’s attention. They remind me of the costumes I saw in Estonia and Russia. Not a surprise as these three countries are very geographically and historically related. I cannot tell one from the other. I cannot tell a Malaysian to an Indonesian either even though they are all Asians.

It is quite interesting how geography impacts history and affects our civilization. It determines how we live, how we utilize our natural resource and how an ethnic group of people is formed. I have noticed myself that Asian ethnic kids grown up in western society have more fair skin than those living in Asia. I think it is caused by geographic resource which includes food, water and such. American-born Asian kids have also a ‘reformed’ look that is quite easy to be distinguished from native Asians.

A nine year old girl in a hot pink demure dress was selling the greeting cards she hand-drew herself! She was surely standing out in the crowd when the majority is wearing unique and extraordinary apparels. She is your All American girl, contemporary and conservative. I was really impressed by her work and her independence.

I myself have always been interested in making greeting cards, but other than making a few for gifts, I have not done much of anything. She is here to be my inspiration.

I am only showing a few images to explain the diversified styles at Eugene Saturday market. You can stand on a street corner and capture a whole world of unique fashion, one of a kind. This Saturday Market is no longer just a hippie market, it is full of creativity and surprise. Tie-dye is still popular but no longer a dominating style. It is everything and all possibilities.