Skip to content
Never been much of a TV watcher, I am actually addicted to a Spanish TV show, ‘Grand Hotel’, for three weeks.  Well, I should say ‘we’, because my husband is included. There is a total of three seasons and 70 episodes and we only watched them in the evenings. Started out with 2 episodes per night, we advanced to 3-4 episodes, and last week we did 5-6 episodes every night.   In less than three weeks, we gobbled down all the episodes.  Believe it or not, we watched the last 28 episodes through YouTube without English subtitles. Even though we have no clue what the conversations are about, the ‘silent’ movies still grabbed our hearts and kept us interested. It is surely Agatha Christy comes alive.
I love mystery and suspense stories. I don’t usually read through fiction, but I almost always do with John Grashan’s books. The twisted plots and the last big surprise are thrilling. And we love to analyze the characters and predict the next development. The entertaining factor is definitely there. Addiction is not what I expected, but I do learn something from watching this classic TV show.
The setting of ‘Grand Hotel’ is inside the former Palace of Magdelena which was a gift given by the City of Santander to the royal family of King Alfonso XIII as a summer palace (according to Wikipedia). In 1982, the palace was declared a historical monument and has now become a conference and meeting hall. It is supposedly the most visiting place in Santander, Spain. The location is in idyllic countryside, sitting high above gorgeous rolling green hills and surrounded by blue waters. The architecture is tastefully colorful and the decoration splendidly classy.
While enjoying the beautiful backdrops, we noticed that almost every single clip of the video is a nice piece of photography.  It is the combination of good composition, preset lighting, a directed expression, a bevy of colors, or (of course) a focal point. The photograph (the clip) is so mindfully spliced that our enjoyment is not just the story itself, we were going through a large collection of great photos, one after the other, with our familiar and favorite characters as subjects. How cool is that!  Chinese has an old saying, ‘隔行如隔山’. One profession can be very different from the other. I had no idea how movie clips are so sophisticated and composed and how I adore the talents and expertise behind the scene!
It is surely a good change without nightly TV shows. I am back to my normal schedule and start to organize my photo library again. With my head so cluttered with weeks of treacherous plots, intense moments, and perpetual suspense, I feel waterfall images have soothing and cleansing effects.Below are some waterfall pictures that I took during our hike to Falls Creek and Copal Creek. Going through waterfall pictures is like having Popsicle on a hot summer day. White water just has that magic power. I used to Think Snow to cool myself down and now Think Waterfall to cleanse and refresh.

Oregon is not lacking waterfalls, but I have not taken much interest in shooting waterfalls. Somehow I felt the creamy look is not natural.  But when the watercolor is transparent, it looks quite boring.  There is a reason why most photographers produced creamy-looking waterfalls.  I decided to test it out and I have to admit that I like them better. 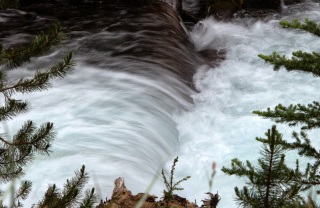