What an unusual summer we have here in Willamette valley! Back in February, we celebrated early sunshine and came in April, all things were blooming and thriving. This is definitely the most colorful summer I have enjoyed around our house. Then, high temperature began to emerge in May, above 90’s and it seemed to stay this way for couple of weeks now. Except maybe two days, I have not seen the hi’s go down below 90 in a 10-day weather forecast.

The good news is, when all the flowers are in their prime, fragrance and pollen are flowing in the air, birds seem to become extremely active. I like to sit on our porch and work from my laptop when the temperature is still mild in the morning. To me, luxury is to be surrounded by flower aroma, birds chirps and pampered by pleasant breeze. It is now late spring and baby birds just learned to fly and they loved to try. I was often so entertained by their clumsy flying behavior that I forgot what I was doing in the computer. Earlier I expected to capture some shots with mom’s feeding babies, but mothers are all so protected with their newbies, I have not had any chance to get a perfect shot yet. But, I get to watch siblings chasing one another and most exciting, I have seen a few unexpected visitors !!!

A Bunting showed up in our feeder briefly more than two years ago. Caught by surprise, I only had a quick glance, but the vivid and stunning colors have always in my mind.  When this Bunting suddenly popped up this time, I happened to have my camera next to my laptop. I held my breath and raised my camera very cautiously (in order not to disturb him). But, does he seem to mind being photographed? I don’t think so. I thought I was spying on him, but he is the one does the scrutiny… His appearance has surely made me a great day!

You can listen to their call through this link.  All About Birds have very comprehensive information about all sorts of birds in all regions. 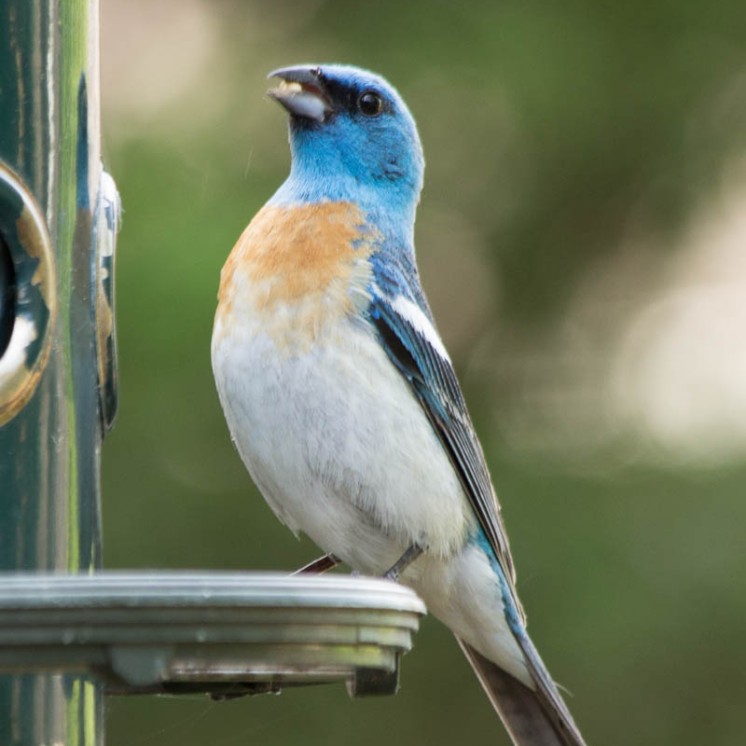 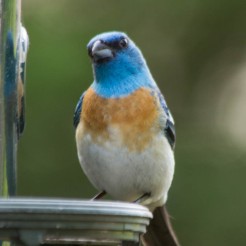 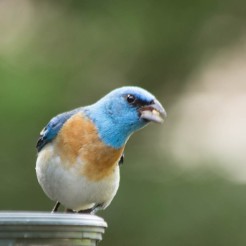 Most of the time I can be very focused on my work except if any of the birds start to sing or just make calls, I would have urge wanting to identify the birds.  American Robin has absolutely the sweetest voice, but they are everywhere and I have heard enough. House Finches are not uncommon, but it is not all that easy to take their pictures. Their song is very high-pitched, crisp and pleasantly distinctive.  Go to  All About Birds site to listen to House Finch song.

Not only their voice, male House Finch’s behavior is sometimes hilarious. They usually react very quickly and flee in no time, but sometimes, he checked you out, little by little and from different angles, just like Bunting. The study says, Bunting and Finches have similar personality. Well said. 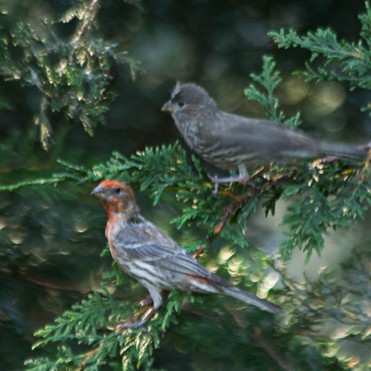 Male has that distinguished orange red color from head to breast while female is in plain grayish brown color. One of the reasons that I don’t get tired of House Finches is the companionship that they demonstrated. Their male and female always travel together.  Male bird is the one who carry nesting materials, feed his female while she is in her pregnancy and feed babies after they are born. Not only that, I often saw male was guarding when his female is eating on the feeder.

I captured this pair later in the afternoon yesterday. It was dark outside. I thought they are couples, but I think they are Dad and a baby girl. Babies have rounder head and puffier feather. You can easily detect a baby when it is flying. 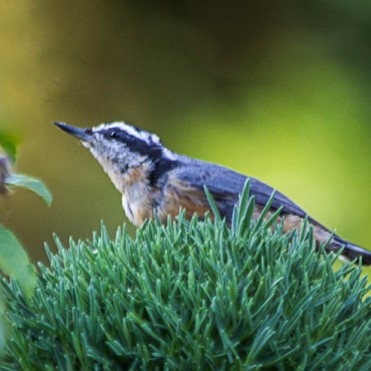 Nuthatch is definitely one of my favorite birds, but prior to this week, I have only seen them twice this year. Believe or not, today I saw two of them flying back and forth right in front of me all day long. They would stop to pick up some seeds and instantly go out of my sight. The moment when I picked up my camera, they disappeared. Except that this (apparently) young bird was flapping its wings awkwardly and it fell on my flower basket at least 6 times. It was just too funny to watch.

Hummingbirds are very territorial. I particularly set out two feeders, but there is still no peace among them. They fight their own species and others. Anna’s Hummingbirds (green color) are the aggressive one while Rufous (orange, golden) are my favorite. While Anna’s are guarding the feeders on regular basis, I seldom see Rufous around.

Rufous looks more attractive and they are funny sometimes. We saw one Rufous came to our fountain to drink that I missed the shot. The other one stood on the flower basket hanger and just stared at us fearlessly. It was there for a while that I had enough time to get our 500mm, check out the details. Isn’t it a beautiful bird?

What a wonderful week to receive these unexpected backyard visitors!!! If they will come more often in such hot summer days, I am willing to endure the heat as an exchange for their appearance. I have been wanting to texture tons of flower images that I have taken, But, as soon as my bird buddies came around, I was completely distracted…..