My emotional attachment to Cormorant began in Guilin, China.  The thought of them being used to catch fish with their throat choked often disheartened me. I like to see them enjoy their life in the land of freedom.

Cormorants are common inhabitants on the lakes and rivers. My lack of enthusiasm to carry a big lens could only bring me home the shots from distance, but my desire to see them closer and in more details is always there.  My friends suggested me a morning walk by the lake (artificial but beautiful) in their community. I expected to shoot some reflections, but… I was so thrilled when I discovered this cormorant just about 10 feet away from me.  With the pictures downloaded, I was excited to see its finer facial features and feather details. It is a beautiful bird. Prior to this day,  I think them of plain and poor birds in boring black color. But now, check out their blue eyes and the elegant feathers.

I believe every creature has an unique character or feature of their own, but we need to find them and get to know them. How I learn not to make a quick judgment without perceiving it further and more thoroughly! 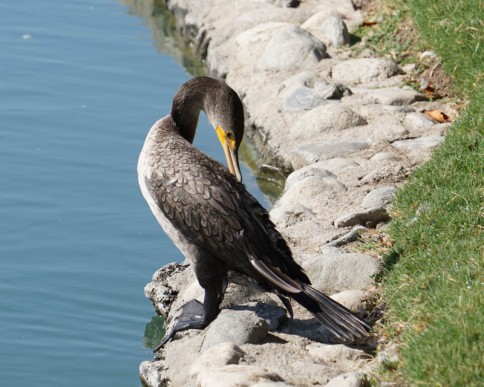 My friends have pointed out the beautiful sections by the lake, but this cormorant has switched my mind to other birds. Walking by the lake with my eyes on the birds. How did I know that I would end up with a few bird pictures? I was told that this is an Egyptian Duck because of its color and texture resemble Egyptian historical trademark.

Ducks are everywhere where I live, but this duck is new to me. Will I ever be made known to all the ducks? far from it.

Some bird was flying in front of me and quickly hid in the tree. I followed the white spot and was drawn to the sparkling red eye of this Night Heron!  He thought he was well covered by the tree limbs, but his red eyes were too distinguished to miss.

My bird buddies have made me an awesome day not mentioning the company of my college friends who I have missed so much.