It is nothing new. I am not a good driver and I don’t like to drive if I don’t have to.  When I am driving, I usually told myself, “give your undivided attention”.  However, 10-15 minutes onto the drive, I began to wander and ponder.  The situation is getting worse now when I am often searching for photography subjects while driving.

It is not fun when I was homebound for weeks. Immediately when I could drive, I got out of the door with my camera and headed down the country roads. I have seen and heard that there are increasing birds activities in the area and I had a high goal.

Passing through, I saw a few Bald Eagles, American Kestrels and Hawks in distance. I smiled in my heart and thought it would be a day of good harvesting. I was in no hurry to stop. I knew more birds were waiting for me…

About 20 Tundra Swans were grazing on the distant field. I thought I would stay there for a while and decided to move my car further away from the road. My eyes were on the swans when my car was rolling into the farmland. It seemed that I drove a bit too far and needed to back up a little. At that moment, I heard my front wheels growling and realized what I was deep in trouble. I called my husband.

An old lady and a sherif drove by and they both wanted to make sure that my rescuer was on the way. Another 4-wheel drive truck was coming towards me and the driver stuck his head out and I heard, “what are you doing here?” Came to know who he is and also noticed there were two more guys in his car, I almost wanted to bury my head in the mud. Three guys from my photography club !!! The rescue mission was eventually carried out by three he-photographers, my husband and the farmer with his tough 4-wheel drive across the road. And, I believe this small episode has been passed around in our club. 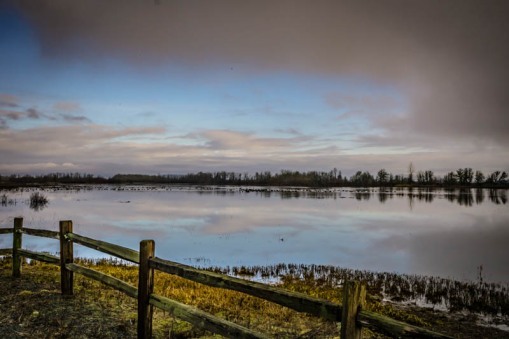 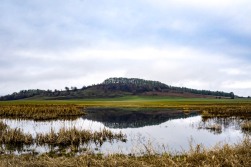 I came back to the country roads by the wildlife refuge the next day except that I was not the driver this time. Wildlife refuge provides the most natural habitats for the birds. Landscape is another thing that draws me in. I found extremely natural, rural, wild and unique scenery in the vicinity. Thousands of geese were flying and landing in the field just like a swan of flies. Groups of Canadian geese flew by continuously.

Since I first encountered American Kestrels in our Palouse trip, I discovered that they are actually quite common in our area. They react quickly when people are approaching unless they are up high on the electric wire. I spotted this one from distance and aimed at him as our car was coming closer. Unfortunately it was back lighting in an overcast day and he was not looking at our direction. Out of desperation, I yelled at him., “hey, Kestrel, don’t let me down!”. He actually turned his face briefly and I was able to snap a few shots.

If you like birds, you would understand why photographing birds can become an addiction. I don’t see them often and I may try 10 times and only get one good shot. Some people think you can randomly take a picture and Photoshop it to make it fly. It does not work that way. If the initial shot is not decent, further remedy becomes impossible. I added texture to the background to cover the bleak sky.

I may have taken Great Heron’s pictures 10 times, but even so I would not skip a chance if the right moment arises. Completely unexpected, he took off right in my sight. It was a bit far away and I did not have my longest lens with me so I tried my best to stabilize my camera. A streak of lucky sunshine happened to come through…

One disastrous day rebounds with two decent bird shots, I called it a victory.

One thought on “Roaming in country roads”