It is the time of the year to bore (I hope not) you with tulips after tulips. Tulips were created in such a glamorous way that no photographers can resist the charm and temptation. This is my third year shooting at Wooden Shoe tulip farm. Skagkit Valley (Washington state) tulips are also pretty awesome, but the farms are spread out. Wooden Shoe farm is in one place and one destination. The beauty is more intense and better for photographers.

Every time I come, my eyes land on something different. I usually bring back complete different pictures. That’s the fun and the drive to keep bringing me back. I simply snapped the first year and I had more thoughts in mind the second year. And, I actually had a list of my pre-visualized shots this year before I headed up there.

However, the progress was not made according to my plan. I was often overwhelmed with the vast varieties and I ‘got lost’ immediately when I walked into the field. Not only that, I would aim for one thing and get side-tracked by another…

Early in the morning I did not expect the large balloon to soar so early and so quickly. By the time when I had my camera ready, I had to drop my tripod and just run after it.

Do you remember that I like sparrows? He sang to entertain all the photographers and visitors. He asked for no credit. He did not need a band

to echo in the background. He simply contributed with his natural gift, a crisp and cheering voice.

A streak of morning light was passing through and bathed the row of flowers. They are golden and glorious. Weatherman said partly cloudy, but it turned out to be more like a mostly sunny day.   Getting up at 4:00am is not enough to hold on the golden hour in this weather.

Sky was the crisp water blue, but my flowers were toasted. I got down on my knees, low and lower. And, I found a combination of color palette that sings my heart. Purple has been always my favorite and I began to like blue in recent years. Believe or not, yellow quietly walks into my closet.

Red, to me, is very powerful and overwhelming. I am not attracted to red and I don’t own a single piece of red clothing. But red flowers with white trims are striking and dazzling romantic.

I may be technically stronger this time, but inspiration does not flow with technology and timing. Some of my favorite images were taken in previous years. 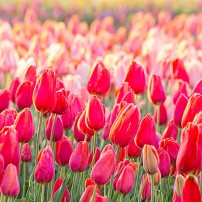 Writing my blogs weekly forces me to go through my pictures and make efforts to process some of them. One of these days, I will have to lock myself inside without any vehicle available to go anywhere. Hopefully I will eventually go over all the pictures I have taken.