Left the flourishing and green northwest here, I landed in a desolate and barren desert country in Xinjiang, China. Big Sky in Montana is nothing in comparison with this one. I cannot begin to tell you how big it is because I could not see the end. It is a gigantic sky without end.

I was a tourist, not a photographer on this trip. I brought a tripod, but it sat inside my suitcase at all times. We were bused from one location to the other and mostly took pictures through the dirty windows and on a moving vehicle. Prior to the trip, I envisioned a vast pasture with minority boys riding on the horseback and being surrounded by his herd of sheep grazing on the grass, but that was not the route we went through…

In Gansu province, I finally got a nice surprise. Yangguan 陽関 is a mountain pass established and fortified around 120 BC by Emperor Wu in Han Dynasty as a defense post. It is also one of the two important western passes (the other one Yumenguan玉門關). Standing on top of the gazebo and looking down the surrounding vast land, I was overwhelmed with sensation of nostalgia and unspeakable tranquility. It is that typical Chinese charm that often reminds me of my root.  Beacon is built to burn flammable materials as the warning signal in case of imminent danger. The one pictured is the original ruin restored.

A few pieces of ruins are preserved to show. Most of the building structure is apparently refurbished with modern materials. A statue of Zhang Qian 張騫 (an imperial envoy in Han Dynasty, served to explore the world outside of China, the originator of Silk Road) is standing in front and back of the fortress. It is interesting to see some of the ancient battle device models. The last image reads for me a popular phrase, “you take the open road, I’ll cross the single log bridge’ or simply put it, ‘you go your way and I go mine.’ (你走你的陽関道，我過我的獨木橋.) Chinese language has inseparable relationship with its history and geography. Here is one small example.  Many names and places in literature can actually be identified in real life.

We have a sand dune in Florence, Oregon where people roar and roll their motorcycles across, otherwise, take the buggy ride. There people take the natural path, walk up and down the hill. It appears easy enough to simply walk up the hill and I did. However, pretty soon I was possessed with my fear for height… Besides my desire is to take pictures and not to enjoy the sense of ‘overcoming the world’ from the top, so I came down. You may say that I was ‘chickened out’. 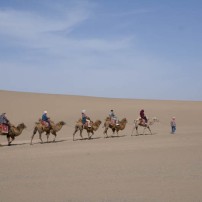 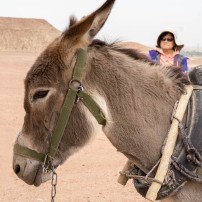 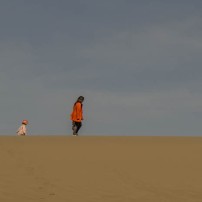 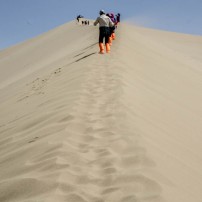 Camel ride is a major tourist activity. I debated myself many times and decided to stay down. If I am on camelback, I won’t be able to take the classic camel shots that I wanted. Besides, upclose, I found these animals old, filthy and worn-out.  A donkey pulled us 4 people up and down the hill at Yangguan. It was fun to have donkey as our chauffeur on the open road, but not after I discovered one of the donkeys was working his way with one crippled leg. All of our weight was on his three legs!!! I wish he could talk and scream.

This sand dune is called Mingsha Mountain 鳴沙山. I love the sculptured shapes and lines. The silhouette of carmel crew makes me couple favorite pictures. Desert is no longer boring when we utilize and enjoy it. The mother has no worry to let the little girl run behind; The guy can drop his stuff and have a sand sled.

Crescent Moon Spring (月牙泉) or ‘Crescent Lake’ (shaped like a new moon) is a 2000 year old oasis in the desert. It provides the living water for the residents in the area. The view from top of the mountain must be nice, but I did not make it to the top. The lake is by the sand dune, but it is not covered by the sand. Something to do with her geography, the lake remains clear and crystal blue. The depth was however getting shallower before the government took measure to refill and kept it up.

The scenery I witnessed can mostly be seen here in Northwest, but the cultural and historical exposure is unbeatable. I feel blessed to live here in Northwest to enjoy an easy and ‘natural’ lifestyle. I also feel honored to be originated from one of the most significant culture in human history. This trip does not satisfy my desire to take some stunning scenic pictures nor did I have much chance to interact with the minority residents there, but I was given an important culture and history lesson and from that I am able to re-evaluate my ethnic background with a refreshing view and perspective. To me, that is well worth it.

More to come in the upcoming blogs.