On the recent trip to California for a family matter, I saw California is not as brown as it used to. The snowfall has passed down south, and water enriched the land.  Interstate 5 is the primary channel to connect California and Oregon. I barely used my camera inside California, but when the scenery began to change, and I constantly had the urge to raise my camera, I know I am closer to home in Oregon. This time instead of going all the way I-5 north, we decided to take Hwy 97 north… and pretty soon, my camera battery was exhausted.

Born as a Chinese and cultivated as one, I have a strong tie attached to the culture and am so easily attracted to that smokey and dreaming ambiance in a traditional Chinese brush painting. We could not stop at the freeway, and the windshield is filthy. The wind blew hard, an attempt to open the sunroof failed. So I began to shoot through the window.

I like things to be natural, authentic, and less man-made.  The above picture has a blue hue out of the camera, and the image below is almost black and white.

It came the sunset time, the golden tone was coated on everything. So pure and so original. 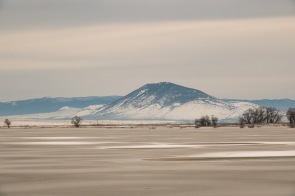 We love to photograph birds because Oregon has so many of them. The region we drove by was frozen solid, but Raptors are aggressive predators, and they were almost the only ones around besides a couple of Bald Eagles whose white head stood out on the snow.

I hang out with many seasoned birders, but I have to confess that I don’t make efforts to identify the birds or keep track of the bird count. I simply enjoy them and care mostly about how the image turns out.